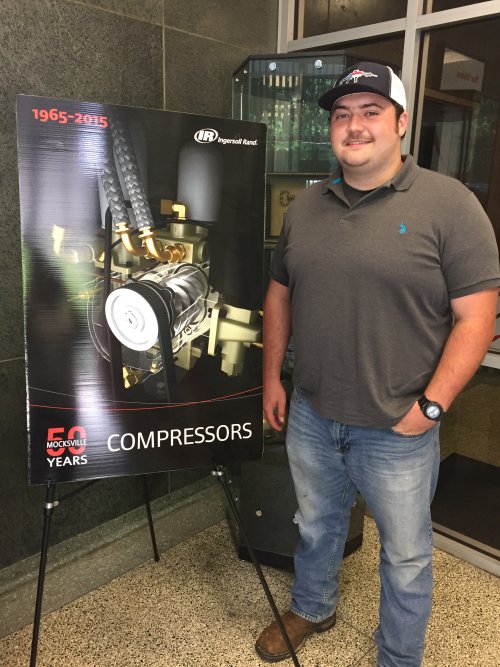 The first to complete Ingersoll Rand’s apprenticeship program which began in 2015, Moore is now a full-time employee in the Mocksville plant’s maintenance department.

“Craig is our first success story and a poster child for the program,” Kern, human resources generalist, said with a smile. “He did an awesome job in the apprenticeship program, finished his schooling at DCCC, and the maintenance team has had really positive things to say about him. We are thrilled to now have him on board full time.”

Moore, who works third shift troubleshooting and repairing machinery, is equally excited and said, “I don’t just have a job, I’ve found a career.”

The Mocksville plant supports the Compression Technology Services Branch of Ingersoll Rand through the manufacturing of Rotary, Centrifugal, and Thermo King air compressors and fabricating parts for its Trane businesses.

Apprenticeship Program is a Pathway to Success
Like many companies across the nation, IR began its apprenticeship program to address the retirements of an aging workforce as well as a critical skills gap in the younger population.

“We have many employees, particularly in our maintenance department and machine shop, who will be retiring within the next ten years,” Kern said. “A lot of their knowledge is tribal knowledge based on what they have learned over time. Although we are documenting processes as fast as we can, there are so many different variances to processes and products that it is hard to get it all. We need them to be able to share their knowledge with new employees, but nationally, there aren’t many people going to school to be in maintenance, to be an electrician, a welder, a machinist, or to do a lot of these manufacturing trades.”

“Our goal is to find those students who don’t necessarily want to go to school to get a four-year degree. We want to find students interested in going to community college and who like to work with their hands, who like to take things apart and put them back together, who like to tinker with cars, who like to do these hands-on skilled trades and then give them a career path and find an opportunity for them.”

“We want to be ahead of that skills gap curve, and we want to help these students find a home but we also selfishly need employees who have this background, who have this skill set, and who have this knowledge. Maintenance employees are extremely important to the success of our company.  According to the Machining Operations Manager, Stacy West, when a machine is down the company is losing $200 per hour.”

“Ingersoll Rand decided to make a big investment in students by paying them $14 an hour, which is significantly above minimum wage, to work 20 hours a week while attending classes at Davidson Community College to become a maintenance technician. We also pay for all of their tuition and all of their books. Our apprentices earn a degree, come out debt free, and have a full-time job opportunity waiting for them.” 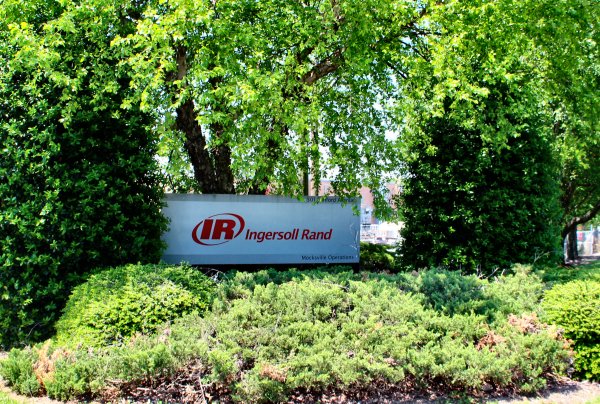 The Journey from Student to Machinist with No Tuition Debt
Moore, a 2015 graduate of Davie High, was the perfect candidate for the apprenticeship program.

“I took a couple of welding classes my sophomore year and met Janet Barnes (career and technical education (CTE) facilitator at Davie High) who told me about the Ingersoll Rand apprenticeship program and pushed me to apply,” Moore said. “I had no idea what I wanted to do, but graduation was coming quickly, and I had to do something. I knew I definitely wanted to do something with my hands; I’ve always worked on cars with my dad and grandparents. The apprenticeship program sounded like an excellent program, and I liked the idea of coming out of school not owing anything and having a great job. Ingersoll Rand has always been here, so I knew it would be a great place to work.”

His parents were enthusiastic about the opportunity and encouraged him to apply.

“They also liked the idea of not having to pay for college,” Moore said with a grin. “My dad started in maintenance and is now a plant manager at Alston Enclosures in Yadkinville, so they understood what a wonderful opportunity this could be for me.”

“I was worried about the school part at first, but it worked out well. If I had questions about what I was doing in school, I could come here, and the guys here would explain stuff to me and help me with my assignments.”

Moore graduated from high school in June and began the apprenticeship the first week of August. The program is designed to take around four years to complete because participants generally take a partial course load while working an average of 20 hours per week. A typical schedule would involve classes on Mondays, Wednesdays, and Fridays and work on Tuesdays and Thursdays.

Once he got started, Moore opted to accelerate the program by going to school full-time while also working full-time. He completed the program in a little over 2 ½ years.

“I wanted to be able to put myself as far forward in life as I could. I will be able to buy a house instead of paying off college debt,” he said.

Kern is impressed by his efforts. “Craig is a real go-getter and took it upon himself to speed up the program, but we certainly don’t expect that,” she said. “When we talk to students, we promote the four-year plan, but because our maintenance department and machine shop operate on three shifts, we have the flexibility to work with students to find a schedule that best fits their needs.”

“A lot of high schoolers don’t want to do anything with their hands, they want a desk job and don’t want to get dirty, but I would definitely recommend Ingersoll Rand’s apprenticeship program if it is offered to them. It’s been a good thing for me personally,” Moore said. “I’m thankful for Mrs. Barnes’ support. Who knows where I’d be if she hadn’t put those papers in my hands and I hadn’t filled them out?”

Pleased with the program’s success so far, IR is expanding the program this fall to include three maintenance and three machining apprenticeships.

Applicants must be enrolled/plan to enroll in classes at DCCC in the summer or fall of 2018. To apply, visit Ingersoll Rand’s career website: www.ingersollrand.com/careers.